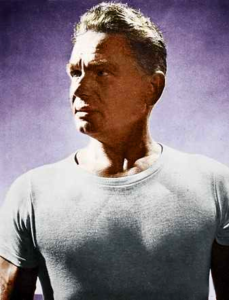 Joseph Pilates was born in 1880 near Duesseldorf, Germany. He was a very sickly child. He suffered from asthma and rickets. However, he did not give up and overcame his physical limitations by practicing bodybuilding and gymnastics. As a result, at the age of 14, he became a model for anatomical drawings.
He practiced many sports: skiing, diving, and, of course, gymnastics.

In 1912 he left for London. There are several versions concerning the motives of his departure and the history of his life in England. One of them says that Pilates went there to practice the profession of boxer; another that he worked as a self-defense instructor for Scotland Yard police officers; yet another shows him as a circus performer touring the country with his troupe.
After the outbreak of World War I, he was interned as a German. During his internment, he perfected his exercises and taught other internees his method.
The 1918 flu epidemic killed many people in England, but all those who exercised with J. Pilates survived. Here, too, Pilates began to introduce exercises with springs attached to hospital beds, so that patients could undergo rehabilitation while they were still in bed. This innovation led to the creation of a whole new range of equipment for exercise and rehabilitation.

After the war, Joseph returned to Germany. His method gained favor and great interest in the dancers’ community, in particular Rudolf von Laban, whose dance notation system is still used all over the world today.
The famous dancer Hanya Holm used many exercises in her program and they are still part of the so-called “Holm techniques”.
In 1926, Joseph Pilates came to the USA. During a trip to the States, he met Klara, who later became his wife. In New York, Joseph and Klara established their first gymnastics facility in the building that housed the New York City Ballet.
The Pilates method quickly gained popularity in the USA, first among dancers and then, in the 1970s, among ordinary people.

Klara and Joseph developed the method until Joseph’s death in 1967. After his death, Klara, known as a great teacher of the Pilates method, continued to run an exercise studio for the next 10 years – until her death in 1977. Joseph and Klara educated their successors who propagated the method in many countries. The most famous are Kathy Grant, Lolita San Miguel, Ron Fletcher, and Alan Herdmann.

Check our FAQ, where you can find answers to the most common questions